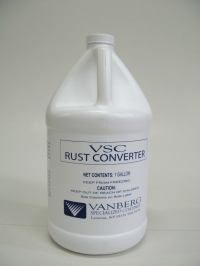 Vanberg Rust Converter stops rust in its tracks preventing further corrosion and rusting on metal surfaces. When applied, it chemically converts rust into a stable black compound. It will oxidize other corrosion and scale. A clear acrylic layer then forms over the converted rust that can be covered with seam tape or coated with AMC-100, EM-15 or V-thane. Or, the clear acrylic layer will last as a stand-alone coating.